skip to main | skip to sidebar

So, over the past 10 days I've confirmed a few things. First, knowing I lost my job is a lot easier on me than wondering if I was going to lose it or not. I definitely handle adversity better than the unknown - I learned that when I was dealing with Cancer - chemo and radiation weren't as hard on me emotionally as the first few weeks spent figuring out exactly what I had and what to do about it. I have little patience for analysis - I just want to do.

Second - it's a good thing I haven't retained my childhood shyness (shut up. I was). It seem I know a ton of people and I have become a networking machine. Jobs aren't exactly plentiful but there are definitely some options available in my field as well as people willing to put in a good word for me, so I'm hopeful I can make something happen soon.

Third, the silly, pesky issues of finances/mortgage/food aside, life without a job - for at least the short-term - isn't too shabby. I'm putting a lot of energy and time into hunting down new employment but I'm also making sure I set aside time to work out, get more sleep, and of course play with fiber.

The knitting mojo disappeared last week - and I'm blaming it all on those fuzzy little Alpaca back in Vermont - I seem to be much more interested in fluff than yarn. Last week I borrowed Jasmin's drum carder and played around a bit with some of my stash.

When I first learned to spin on a spindle, I bought this, planning to make striped socks: 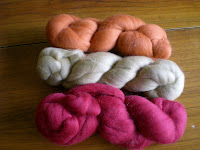 So I put it on the carder: 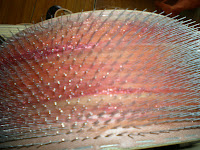 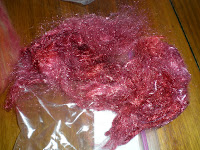 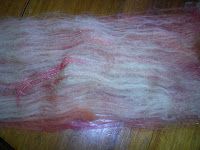 And after a few passes, turned it into this: 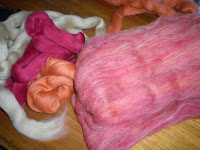 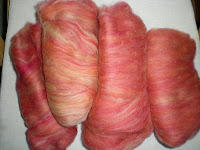 If you embiggen this shot you can see the touch of sparkle. I think I'm in lurve.

I was so inspired I took a few hanks of my hand-dyed fibers that had felted a teeny bit and fluffed them up:

I think this is a merino-tussah blend. I turned it into this: 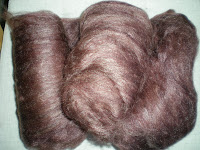 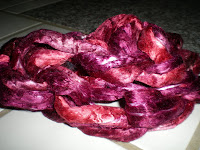 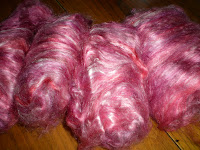 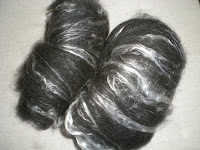 Actually, that was a bit of black Alpaca which I carded with some Bombyx, which I'll dye some time - maybe a dark blue? If you have any ideas, speak up!

Carding all this stuff was a ton of fun. It's a good thing I had to return the carder though - if it were still here, I'd probably carded every bit of my fiber stash into one giant pile. It's hard to know when to stop.

I've also been spinning. While I was in Vermont in March, Norma gave me a fabulous gift of some Vermont Llama down. It's lovely stuff - and I'm spinning it into some lovely laceweight (if I say so myself, and I do). This picture was taken a little earlier in the week - I'm now exactly half-way done and that bobbin is completely full. I'm dying to finish this up so I can see the finished yarn - I had no idea Llama was so soft. 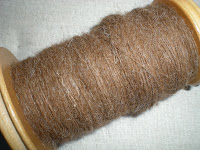 I know my knitting mojo will come back soon - I've started obsessing about lace and even picked some Dream In Color Baby which was on sale this weekend at Purlescence (again, yay for birthday money). 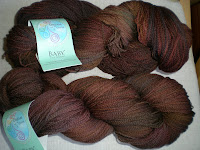 In the meantime, with this face, who can blame me for focusing on fluff right now? 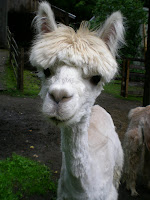 Awww, that face - all you need for a brief pick-me-up is to look at that photo.

Love the fluff! Am jealous of the fluff and the friend with a carder and the fluff.

hahahaha...that can be taken in so many different ways...

Anyway, back to the subject. You did a great job carding up your stuff - you have a natural talent. Can't wait to see what you do with it all.

Being out of work is lovely, but as my friend says, "the pay sucks".

Good luck on the job hunt...see you out in the jungle...

Ooo, can't wait to see how the sparkly socks turn out.

Oh my! All that loveliness is almost too much to bear. I feel a bit lightheaded. ;)

""I have little patience for analysis - I just want to do.""

me too. i'm exactly that way too.

Ack! You are tempting me with the drum carding!

Support Me in the Susan G. Komen 3-Day For The Cure 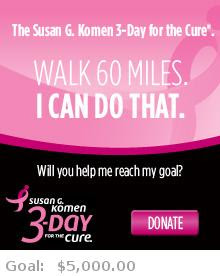 (formerly) no-blog-rachel
Bay Area, CA, United States
I loves me some email! Unless you're offering to enlarge my you-know-what - in which case don't bother. But if you're not, I'm rachelatmaubydotcom. 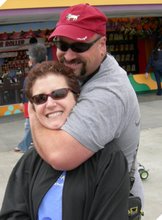 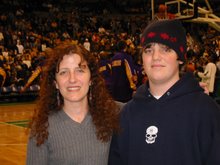